Aileen and Zac and were married in front of their family and friends on February 16, 2019. Their ceremony was held at Presentation BVM in Wynnewood, and it was followed by dinner and dancing at the beautiful  Crystal Tea Room in Philadelphia. 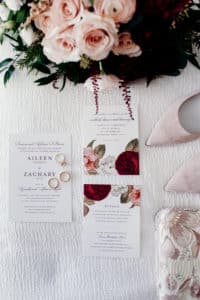 The couple met at work, but they didn’t start dating until Zac moved to New York. After two years of being friends, he invited her to be his date to a friend’s wedding, and the rest is history! They did a long distance relationship for a bit, and then Zac moved back to Philadelphia.

Zac and his family are longtime Sixers fans, so it was no surprise to Aileen that the two ended up at a Sixer’s game on Valentine’s Day. It was an exciting game, so Aileen thought it was strange when he suggested they leave the game early; little did she know he had something even more exciting in store. He proposed on a picturesque street in Philadelphia, and she of course, said yes!

Aileen and Zac are an interfaith couple, and rather than having a non denominational wedding, it was important to both that their wedding celebrate not just their love, but also the distinct faiths that helped shape them. Aileen’s priest and Zac’s rabbi worked with one another, and with the couple, to select prayers, readings, and songs that would compliment one another and highlight the shared values that exist between these two religions. The priest even allowed them to build a chuppah on the alter, which they stood beneath during the ceremony.

Their inclusive approach is a testament to the old adage  “if the ties that bind us are stronger than the ones that would tear us apart, anything is possible” We have all the faith in the world, that these two have a wonderful lifetime ahead of them!

All of these gorgeous photos are courtesy of the supremely talented team at We Laugh We Love Photography. For a complete list of vendors, please see below. 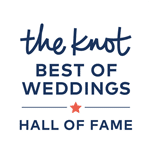