Lisa and Matt were married at the beautiful and historic Water Works in Philadelphia, and it was such a treat to work with this wonderful couple.

Every detail of the day was carefully and lovingly planned with the help of DFW Event Design. From the flower wall to the chandeliers, the space glistened and glowed.

The couple was photographed by the supremely talented Dyanna LaMora. She captured every moment of the day, from the first look at the Rodin Museum to the bride and her father’s ride to the ceremony in her father’s beautiful vintage car.

Surrounded by family and friends, they made their vows and then danced the night away to the wonderful music of Jelly Roll. 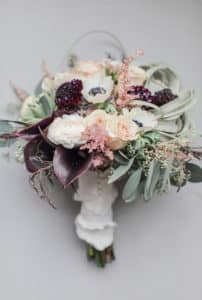 If you are looking for more fall wedding inspiration, look no further than Colin and Alex’s wedding at Front and Palmer. Held last October, these handsome grooms paired moderns elements with romantic touches, and the result was a beautiful combination of colors and textures.

We were honored to work on this wedding and to have had the opportunity to work with side by side with some wonderfully talented vendors, like Grace D Photography who captured these lovely images. 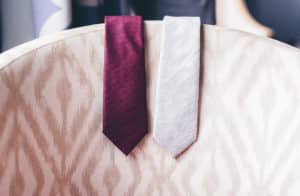 The change in season brings a change in color schemes, styles, and trends, so we thought we’d round up some of our favorite fall looks for any of you bride-to-be’s planning a wedding for this time next year!!

While succulents are pretty any time of year, they pair perfectly with the rich colors of fall! For this event, we decided to contrast the cooler colors with warm golden accents, and it seemed to strike just the right balance. 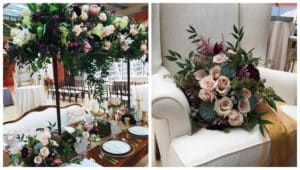 Egglplant, Plum, Wine, Aubergine … A purple by any other name would look just a pretty! Here, we decided to play with pops of color, again incorporating beautiful brassy tones against the soft wooden tables. Paired with ethereal twinkle lights, it’s a match made in heaven!

Crisp. Clean. Bold. Geometric. We love this combination of black and green, and we love the way the simplicity allows each individual flower to shine. This lovely couple held their wedding reception at an upscale restaurant, and they wanted it to be elegant but understated, and these rich greens and the contrasting black and white was the perfect palette.

In April 2002, an independent film starring an unknown actress was given a limited release. That film, which was made on a 5 million dollar budget, went on to earn 368 million dollars in box office revenue, making it the highest-grossing independent film ever and by most standards the most successful romantic comedy in movie history! What movie, you ask? My Big Fat Greek Wedding. 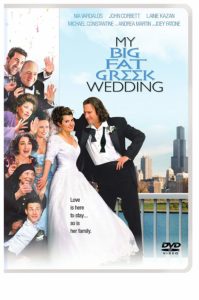 Filled with endearing characters and witty, comedic dialogue, it is easy to see why this film was a hit. But, what turned it into a worldwide phenomenon? Some of it had to do with timing – the movie went ‘viral’ before that word was part of our collective vocabulary – but we believe its enduring success stems from its universal themes surrounding love, family, friends, and they ways in which traditions are used to represent the things we value most.

As wedding florists and designers, we are granted the opportunity to learn about and witness so many beautiful wedding traditions. We recently helped design not one, but two Big, Beautiful Greek Weddings, so we thought it would be fun to share the history behind some of these time honored traditions.

According to The Knot, the Stefana is the focal point of the wedding ceremony. It represents the joining of the couple, and it acknowledges their role as the King and Queen of their home. It also symbolizes the hope they they will ‘rule’ their home with wisdom, justice, and integrity. In the same vein as the exchange of rings, the stefana, or wedding crowns, are blessed by the priest and passed between the almost-newlyweds three times before being placed on their heads.

Widely known as lambades, the wedding candle is a very symbolic element of a Greek Orthodox ceremony.The candles that are used during the sacrament of the wedding serve as a symbol of purity and the way God will light the way for the couple.  The bride and groom each hold a lit candle during the sacrament to show their willingness to receive God’s blessing.

Another very popular tradition is to offer koufetta—fresh almonds with a sugar coating. The almonds themselves, which are hard, represent the challenges the couple may face in life, while the coating represents the sweet times and happiness the couple will share. According to Greek Weddings and Traditions, These almond treats are always given out in odd numbers because an odd number is indivisible, just as the bride and groom should always be undivided. Historically, they were placed on the marital bed the day before the ceremony; Today, they are often given to guests as a wedding favor – called a Bomboniere.

In the same vein, rice is also used in many Greek weddings. Rice, a symbol of fertility and prosperity, is often thrown at the couple as a way to wish them a happy and blessed life together!

It’s not a Greek wedding without lots and lots of dancing!  Whether it is The Bride’s Dance, also known as the Kalamatianos, or the Sirtaki, these circle dances bring together friends and family to celebrate the union of the bride and groom.

One of the most famous dances is The “Money Dance”.  In some regions of Greece, money is pinned directly to the bride’s gown throughout the evening, but in most Greek American receptions, the money is commonly thrown on/near a dancing couple to wish them good fortune and prosperity.

Philadelphia. City of brotherly love. It is as famous for its food and fictional characters as it is for its historical significance. It is also a city of firsts – We were the first American capital. We were the first American city to have a daily newspaper. We were also the first to have an art museum or a zoo. We were even the first major metropolis to have a hospital and medical school.  In fact, did you know that 1 in 6 doctors in the United States has had Medical Training in Philadelphia?! Not too shabby…

One of the ways this historical city has maintained its prominence on a national and global stage is it’s ability to multi-task, to diversify. We are home to Rocky and The Rodin, the founding fathers and the Philly cheesesteak, The Museum of Art and the Mummers. It comes as no surprise then that some of the best wedding venues in Philly are ones that, like the city itself, also know how to multitask. Some of the most beautiful events spaces in the city started out as something else entirely, and/or function in more than one way.

Here are a few of our favorites:

First up we have Union Trust. It was originally a bank, and now it is a gorgeous multi-story space with engraved ceilings and gilded historical touches.

The Crystal Tea Room, with its detailed columns and magnificent chandeliers, was once a private dining room and restaurant in Wanamaker’s. Another fun fact – It was the first restaurant within a department store.

Front and Palmer was a barrel factory. It is now an incredible space that marries rustic, industrial, and traditional elements within one location.

The Barnes, The Philadelphia Museum of Art, and The National Constitution Center, are just a few of the museums that also offer incredible venue experiences. The Constitution Center has floor to ceiling glass panels that overlook Independence Mall.

Last but not least is 2300 Arena. A boxing arena by day and runway by night, this venue has mastered the art of multitasking. Originally a freight warehouse, 2300 Arena has been host to wrestling matches and rock concerts, as well as political conventions and Philly Fashion Week. Industrial and open, it can be personalized to meet your aesthetic style.

Jeff and Sarah held an intimate wedding at the Loews Hotel in downtown Philadelphia, a staple venue for the area. This location also carries significance for the couple, as they enjoyed their first dates in the heart of the city when they were students at the University of Pennsylvania Wharton School of Business! A notable ceremony addition was their chuppah; it was quilted by Sarah’s aunt that incorporated personal messages from their loved ones. We constructed a frame, then added draped ribbon which contributed to the existing romantic ambiance of the room. Sarah’s bouquet was timelessly elegant with several types of flowers, including white roses and white calla lilies, while her bridesmaids carried different arrangements in the same ivory color scheme. In the ballroom of the Loews Hotel, we created unique centerpieces that featured a range of warm colors and lively textures, helping the reception glow spectacularly. We enjoyed seeing the love this beautiful couple shares and were so happy to be a part of their special day!

Matt and Tania shared an elegant November wedding that encompassed an antiquated, romantic theme. The ceremony Mass was located at the Basilica of Saints Peter and Paul. For those unfamiliar, this exquisite cathedral is home to some of the most breathtaking architecture in the city. The celebration continued at the Historic Landmark Building of PAFA, the Pennsylvania Academy of Fine Arts. Tania stated that her and Matt loved each location because they provided both a grand and intimate setting simultaneously. She also loved that her guests could dance around the remarkable art galleries that PAFA exhibits! The flowers were a rustic hue, yet delicate enough to incorporate with the champagne and gold-toned decor. The addition of some warm reception lighting and groups of candlelight on each guest table helped set the mood for this unforgettable evening! Congratulations to this beautiful couple!

A reception of 150 guests followed by a private dinner of 64 marked the naming of the Kislack Center on the 6th floor of the Van Pelt Library at The University of Pennsylvania.  Dr. Amy Gutmann spoke during the reception and ribbon cutting.  The design envisioned combined various shades of reds, burgundy’s and antique mercury silver glass; with candlelight to reflect and bounce through the design.  The table settings sat atop a mirrored table top providing a multi-dimension design for the flowing flowers.  With collaboration from Garces Caterings stunning menu, lighting and draping from Synergistic Sounds & Lighting and the linen/dishware/chairs from Party Rental, it was an elegant affair.

A amazing over the top fall wedding at the Union League.  The wedding decor featured an elegant natural palette of Whites and Ivories with slight pops of very light pink, using a full assortment of Hydrangeas, Stock, Roses and Draping Phalenopsis Orchids.  It was great working with the coordination team at Proud to plan, who kept the day running smooth.  Synergetic Sounds and Lighting provided lighting accents to the room and the nights entertainment.  Thank you Jennifer Childress www.jennchildress.com for the amazing photos provided below.

WOW!!  Yet again all of our clients and business colleagues have come out and cast their vote for us.  We are so happy that our clients were thrilled with their flowers we provided for them, they are the best, and it is amazing that you all have took the time to cast a vote year after year for us.  THANK YOU to everyone that helped put us on top of the list once again. 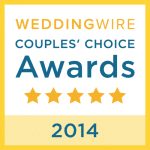